You are here: Home › Border Reivers Exhibition
By ECS Webmaster on June 1, 2011 in News 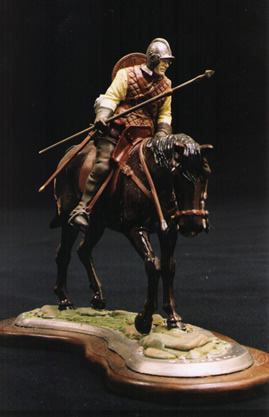 I am an Eliott. The 29th Chief of the Elliots to be exact and you have been kind enough to invite me here to Carlisle. I have a feeling that in the 15th & 16th Century you would not have made me so welcome. I live in Liddesdale on the site of the great Eliott pele tower – luckily now a farmhouse – rebuilt from the old stones of the original building. History sits heavy in Liddesdale as it does all across the Borderlands. We sit on a bluff of the river overlooking the old ford on the road running up to Hermitage Castle five miles away – a mile away is the dramatic site of Liddel Castle by Castleton Cemetery. The valley is now home to some 1000 souls but in Reivers time the population was threefold. All over the hills are signs of long abandoned bothys and fields.

Seen from the fat pasturelands of the Eden valley, the Cheviot hills and Liddesdale, Ewesdale and the notorious Debateable Lands must have been regarded rather as the Hole in the Wall Gang was regarded by the respectable people of Wyoming – full of desperate, unstable and violent men bent on stealing your cattle and sheep, never allowing you a peaceful night’s sleep and thoroughly disruptive. While I am sympathetic, I would like to give you a view from the other side!

Sandwiched between two hostile nations the Borders was a useful buffer zone – I don’t think we can call it a demilitarized zone – the Reivers would have delighted in that phrase – as they were all armed to the teeth! The towns of Kelso, Hawick and Jedburgh were easy targets for an English foray and one of the ways through was up the Liddel valley. Because of this – there were years of ruined harvests and the stock was taken by the invaders. Such problems produced desperate men and so the Reiver’s way of life became the norm.

The Borderers were never quite Scottish or English. Indeed they are of the same stock and they used the political situation to their own advantage, if they possibly could Changing sides when it suited them, infuriating each monarch in turn so are we surprised when James VI & 1st tried to turn us into Middle England and hung Johnnie Armstrong? Although memory of that outrage came back to haunt his Stuart descendant, Bonnie Prince Charlie, when he tried to recruit Borderers on his march south through Liddesdale.

But I cannot come to Carlisle and not mention Kinmont Willie. This thoroughly notorious reiver was taken on a Day of Truce and brought bound and gagged to Carlisle Castle. This was against all the rules of cross border law and Buccleuch and his supporters in a fit of righteous indignation – (the words righteous indignation and Border reivers are not natural bedfellows). Although the river was in full flood they crossed the river and with the help of the Grahams, sprung Kinmont Willie with a great deal of noise and kerfuffle and swam back again with their prize. The resultant backlash from a mortified Lord Scrope, Warden of the English March was terrible. He led an army of 2000 men into Liddesdale burnt the houses and stripped sixty or eighty children of their clothes – it was reported that nine or ten infants perished within eight days thereafter.

After a great deal of pressure from Elizabeth 1, James VI finally bound over Buccleuch to Sir Robert Carey who held him under lock and key for a time in Northumberland. Apparently they got on rather well and his influence on Buccleuch changed his ways and he was canny enough to realise that there was little future in the reiver way of life when James VI inherited. There is a good story that when he was eventually presented to Elizabeth 1st at the English Court and she demanded to know how he dared to storm her castle. His response was “Madam, what is there …that a brave man may not dare?”. She seemed delighted with this remark and turned to her court exclaiming “Give me a thousand such men and I will shake the thrones of Europe”.

Today the descendants of those resourceful reivers still live and work along the Border line. The Elliots, Grahams, Scotts, Kerrs, Humes and others are still about and there are thousands of Borderers that have spread themselves around the world. We hold a Gathering for Elliots from around the world every four years and we celebrate the lives of our forefathers, the Border Reivers. Indeed I have sent many of my visitors into this Museum to watch the atmospheric audio-visual display but always with a warning – “take no notice of that bishop’s rubbishy curse” – like water off a duck’s back – it made not a wit of difference.

Also descendants of those fighting men of old proved to be fierce and brave fighting men during the two world wars. George Macdonald-Fraser who knew the Borders and the Borderers like no other – wrote a book about serving in Burma with the Border Regiment demonstrating the Cumbrians extraordinary bravery and gallows humour – it was ironically entitled Quartered Safe Out Here and the strong gene of the boldness of the reivers comes out very forcefully.

But as we celebrate every four years, this excellent exhibition celebrates their history permanently, bringing the Reivers alive again in such an effective way and making us very thankful that we were born into a peaceful Borderland.