You are here: Home › The Reivers and Their Way of Life 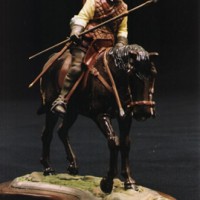 The necessary allegiance to family and the constant state of war and turmoil along the Border shaped the everyday lives of the people. Living depended largely on livestock rather than crops, and their agricultural system followed a regular pattern. Raiding took place all year round, but it was more popular from autumn to spring when the nights were longer and time wasn’t devoted to growing crops. However most time and effort was given to raising cattle and sheep. In April the Borderer would move up to the higher ground, living in his sheiling for four or five months while his beasts were pastured. These summer communities were safer than their winter homes but were still subject to occasional raids. This nomadic life suited the borderers well. They had learned from years of living through wars not to build permanent dwellings but to live constantly on the move.

Their meals probably consisted largely of beef or mutton broth. Bishop Leslie commented extensively on their diet, referring to them eating mostly ‘flesh, milk and boiled barley’ and that bread was only eaten rarely but that ‘hearth cakes of oats’ were eaten instead. He said that the borderers took very little beer or wine which is probably why drunken behavior gets few mentions in the Border records.

Both men and women dressed necessarily in practical and hard wearing clothes. However some style and finery must have existed given the descriptions of items of stolen clothing in the complaints lodged with the March wardens on Truce Days.

The women were usually well treated and highly respected and were said to be generally regarded as fair and comely. An unwritten law in the Reivers’ code forbade the attack and violation of women and rape was an uncommon crime. The children were raised in the strong tradition of their family surnames but it did not last very long and there is a record of an 11 year old Johnson taking part in a raid.

Most of the people of the borders lived in makeshift houses that could be built in a short time. Stakes would be driven into the ground and the gaps filled in with stones and turf sods. The walls were finished off with clay and the roof would be either turf or thatch. Wooden shutters kept out the worst of the weather and the doorway hung with a length of cowhide. These huts could be built in about three or four hours.

One Response to The Reivers and Their Way of Life